Habitat for community and wildlife 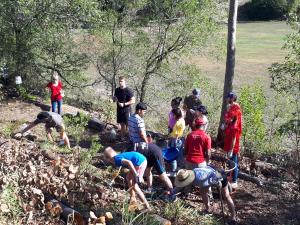 The Mt Gravatt State High School Pollinator Link® garden is a thriving habitat for wildlife and building links with the community.

Results: 50 hours of Bushcare including 40 natives planted to stabilise embankments and attract more butterflies. Weeding and mulching completed the work.

Thanks to Corrine McMillan MP for afternoon tea for our worker bees.

Circles in your rose leaves? 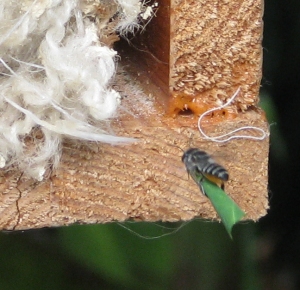 Do you have mysterious circles appearing in the leaved of your rose bushes? I videoed one of the culprits making a nest in the cat’s scratching post.

Female Leafcutters roll the cut the pieces of leaf between their legs then fly off to find a suitable hollow to make their nest. The leaf pieces are shaped into a cigar shape ready to be packed with pollen and nectar ready for egg laying. The eggs hatch in spring ready to go to work pollinating our gardens and forests.

Building homes for birds and bees

Jake Slinger and I led a Pollinator Link® workshop for the Nature Rangers at Downfall Creek Bushland Centre yesterday.

Australia has over 2,000 species of solitary native bees. Solitary bees do not form live in a hive or produce honey however they are the most effective pollinators for our backyard vegetable gardens.

Female Blue Banded and Teddy Bear bees make nests in the ground which they fill with pollen and nectar, lay their eggs then seal. When the egg hatch in spring the young bees feed on the stored food before burrowing out and getting to work pollinating our vegetable gardens.

Step 3: Finish with starter holes for bees wanting to nest.

Leave Bee Home to dry then install in a place sheltered from rain.

Bee Homes completed, the Nature Rangers worked on building nest boxes to provide homes for birds. Clearing trees for building houses means that there is a lack of nest hollows for birds and other species like Squirrel Gliders Petaurus norfolcensis. 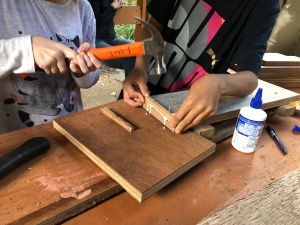 Learning to use a hammer

Timber for the nest boxes is reused hardwood ply donated by Benchmark Scaffolding at Yatala and pre-cut at Carina Mens Shed. Box design came from “Nest boxes for wildlife: A practical guide” by Alan & Stacey Franks of Hollow Log Homes.

First step in box construction is learning to use a hammer correctly. It is less about size and strength and more about letting the weight of the hammer to do the work.

Everyone had a go at using a hammer and quickly got the hang of letting the hammer do the work. “That is much easier.”

Another tip we shared is to blunt nail heads when nailing timber that splits easily.

New homes ready for installation. The Downfall Creek team will arrange installation of the new homes for our homeless urban birds.

Laughing Kookaburras Dacelo novaeguineae love to join us at Bushcare, typically finding a handy perch where they are ready to swoop on any tasty snack like this legless lizard.

Some of the wildlife avoided the attentions of our Kookaburra visitor. We found a female Common Net-casting Spider Deinopis ravidus. Net-casting spiders have a fascinating technique for catching lunch. They don’t make a permanent web but sit with a net between their front legs ready to to catch ants, beetles or spiders.

Steep sides make gully restoration complex so the first step is building access steps. Working from the bottom clearing weeds facing uphill is much safer and faster. Logs or recycled hardwood can then be installed to provide a safe work place and manage erosion.

Restoring the Wildlife Corridor is community effort to clear rubbish and remove the invasive Madeira Vine Anredera cordifolia in the backyards linking Mt Gravatt Conservation Reserve down to Klumpp Road. We are working with Cr Steve Hung to develop a plan for a wildlife bridge across Klumpp Road to link to Roly Chapman Bushland Reserve.

“We power on, trying to sense the walls beside us, ears and eyes straining for anyone coming from the other direction. It’s like holding your breath with your eyes.”

Cycling through a tunnel on the rail trail near Matarraña, Spain. Scary, but exciting, according to Con O’Brien, author of The Ebro Drift blog.

The Matarraña trail is just one of thousands of rail trails all over the world. Rail tracks no longer in use are pulled up, railbeds resurfaced, bridges and tunnels checked for safety. In some places old station buildings are converted to cafes or guesthouses. Railway gradient is perfect for cyclists and walkers, the countryside is interesting, and whether for long journeys or short sections, the trails provide great opportunities to exercise and travel at the same time. 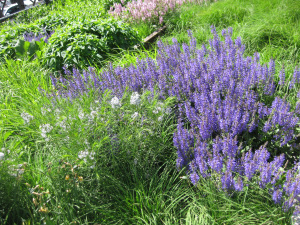 Railway track just visible through the wildflowers on The High Line, NYC

A beautiful day for a walk in the bush. I joined Professor Darryl Jones, Griffith University and members of Karawatha Protection Society for a field trip to explore the Fauna Movement Solutions linking Kuraby Forest and Karawatha Forest across Compton Road.

The discipline of Movement Ecology only developed around 2002 so building this innovative wildlife bridge in 2005 was a bold step. At the time traffic on the two lane Compton Road was rapidly increasing with a consequent increase in road kill. The Brisbane City Council decision to widen the road to four lanes was both a threat and an opportunity if the partnership of Karawatha Protection Society and Griffith University could change the existing thinking from protect wildlife by keeping it off the road to making the road ‘transparent’ to wildlife.

In his presentation Darryl Jones highlighted the importance of community groups in driving change even when the science is clear. What makes this project courageous is the fact that the science of Movement Ecology was only just evolving and researchers have since found many unexpected results.

Small birds are one surprising user of the wildlife bridge. Small birds will normally not cross a wide gap in the forest canopy so being limited to an island habitat they are vulnerable local extinction events like bushfire. The other surprise is the behaviour of micro-bats. The concrete arch sections have become unexpected Shelter with micro-bats making homes in the gaps in arch sections. Each night the bats emerge to forage in the surrounding forests. Monitoring with ultrasonic (anabat) recorders shows no activity above the road (white), significant activity about 100 metres from the road (yellow) however the wildlife bridge itself was a hotspot (bright red) for micro-bat activity transiting from forest to forest.

As part of the Logan [Motorway] Enhancement Project Transurban Queensland is building sophisticated fauna movement solutions including a new wildlife bridge across Illaweena Street which will reduce the road kill on that increasingly busy road and allow for future expansion to four lanes. Combined with underpasses and rope bridges this will create excellent fauna movement solutions linking Kuraby through Karawatha Forest to habitat at Parkinson.

I’m not sure who was having more fun  during the Backyard Bee Home Workshop at Downfall Creek Bushland Centre yesterday. 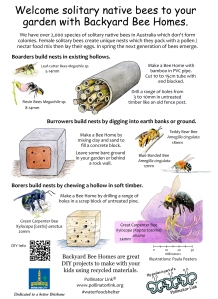 Working with the Nature Rangers was great fun.

I introduced them to some of the 2,000 species of solitary native bees and the different types of nests the female creates in hollows, in the ground or by carpenter bees chewing into soft timber.

The Rangers then dived into assembling their individual Bee Homes using bamboo for Leaf-cutter Bees and Lantana for carpenter bees.

What really blew me away was the artwork they created. We provided a “How to draw a bee” guide from ArtforKidsHub.com, multi-coloured Sharpies and the Rangers went to work producing amazing artwork to decorated their Bee Homes.

Shelter for bees and other insects 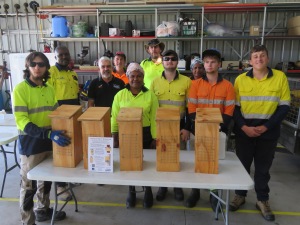 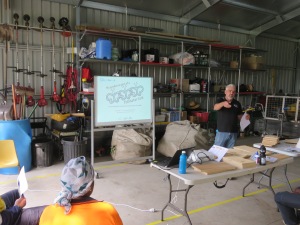 A nest box building workshop for future habitat heroes is a great opportunity to share the Pollinator Link® vision.

I first introduced participants to the threat of urban habitat loss and opportunities for creation for of a new city wide wildlife habitat by providing Water, Food and Shelter in backyards, balcony gardens, school yards and council parks to complement the island habitats like Mt Gravatt Conservation Reserve. 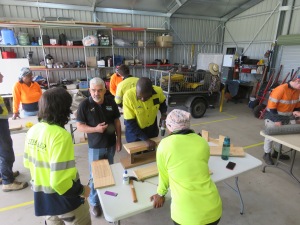 We then moved onto the reason for the workshop: a critical shortage of tree hollows for hollow nesting birds and other species like Brisbane’s vulnerable Squirrel Glider.

Working with the build team was a real pleasure. They loved learning new skills and were happy to step up and show other team members how to something. 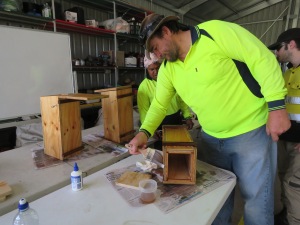 Box design was from Hollow Log Homes’ book “Nest boxes for wildlife : a practical guide”. Also available from BCC Libraries. Timber for the nest boxes was cut to size by the Carina Men’s Shed. The Shed also provided invaluable assembly jigs that allowed the team to produce a consistent quality box.

This morning I re-joined the team to install two nest boxes in trees at the Pony Club site.

Fun in the sun: Installation Team

Today I had the honour of meeting the Greening Moorooka [Bushcare] Group who have been building a Pollinator Link between the western section of Toohey Forest and Moolabin Creek.

Today’s event was a community planting in Moolabin Park to celebrate the 20th anniversary of the Greening Moorooka Group’s work restoring and protecting a chain of parkland forming a wildlife corridor linking Toohey Forest with Moolabin Creek which feeds into Oxley Creek.

In 1998 the Group started planting in Mayfield Gardens then progressively move through restoring Peggs and Koala Parks to Moolabin Park.

This has been a real community partnership with Brisbane City Council with the Group taking anonymous green spaces and bringing them to life with names for the individual parks. In the process approximately thirty parcels of land have been protected from development as housing. The Group have also been instrumental in facilitating the enhancement of the parks for community use with:

Maureen is particularly proud of the way the bike paths  and amenities have brought young and old into the park as a destination in itself and as an avenue for exercise and recreation: safe community space. 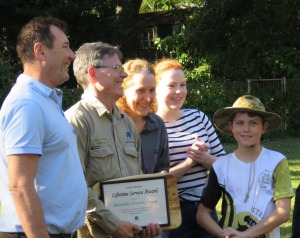 “The bike paths have made a huge difference for community members. I was a really pleased when one day I saw a woman drop off an elderly man at the entry to one of the parks and then drive around to the other end to pick him up. The bike paths have created a place where he can get his exercise.” Jean Rousseaux

A founding member, Jean’s vision fuelled the group for many years.

John and Maureen have a special story of their own. Two of the original founding members of Greening Moorooka Group they have been joined first by Rachel then Ryan. The smiles tell the story of a special family proud of what they have achieved for their community. 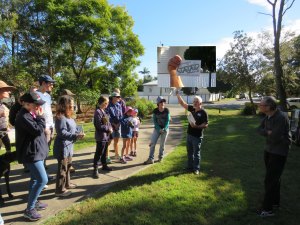 A beautiful sunny morning in the park, what a great opportunity to introduce Pollinator Link  to community members who really understand the importance creating habitat for our urban wildlife.

I fielded a lot of questions about building Habitat Tripods to provide food and shelter for small birds, the importance of Planting Local to Feed Locals, using GroNative app and where to get local south-east Queensland plants: Community Nurseries.

Congratulations to the Greening Moorooka Group on 20 years of valuable visionary contribution to our wildlife and community.

I joined the Crosby Road Bushcare team last Saturday to plant up the Habitat Tripod with vines and shrubs that will create safe habitat for small birds like Fairy Wrens to nest. 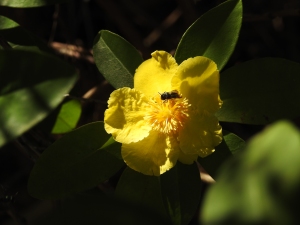 Vines and creepers were planted to climb the legs of the tripod create an attractive garden feature that is also scrubby habitat for small birds. 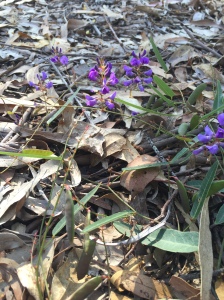 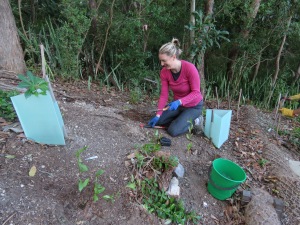 The Bushcare team also did infill planting to complement past planting.

Mulch was spread around new plants to retain water and keep the soil cool.

Effectiveness of the Crosby Road Bushcare team’s planting protocol can be seen in rapid spread of Creeping Boobialla Myoporum parvifolium which has covered large areas beside the steps, flowers winter, spring and summer, and is already producing food for fruit eating birds.

Inspecting the work and having lunch on insects disturbed by the team was a handsome Grey Butcherbird Cracticus torquatus.